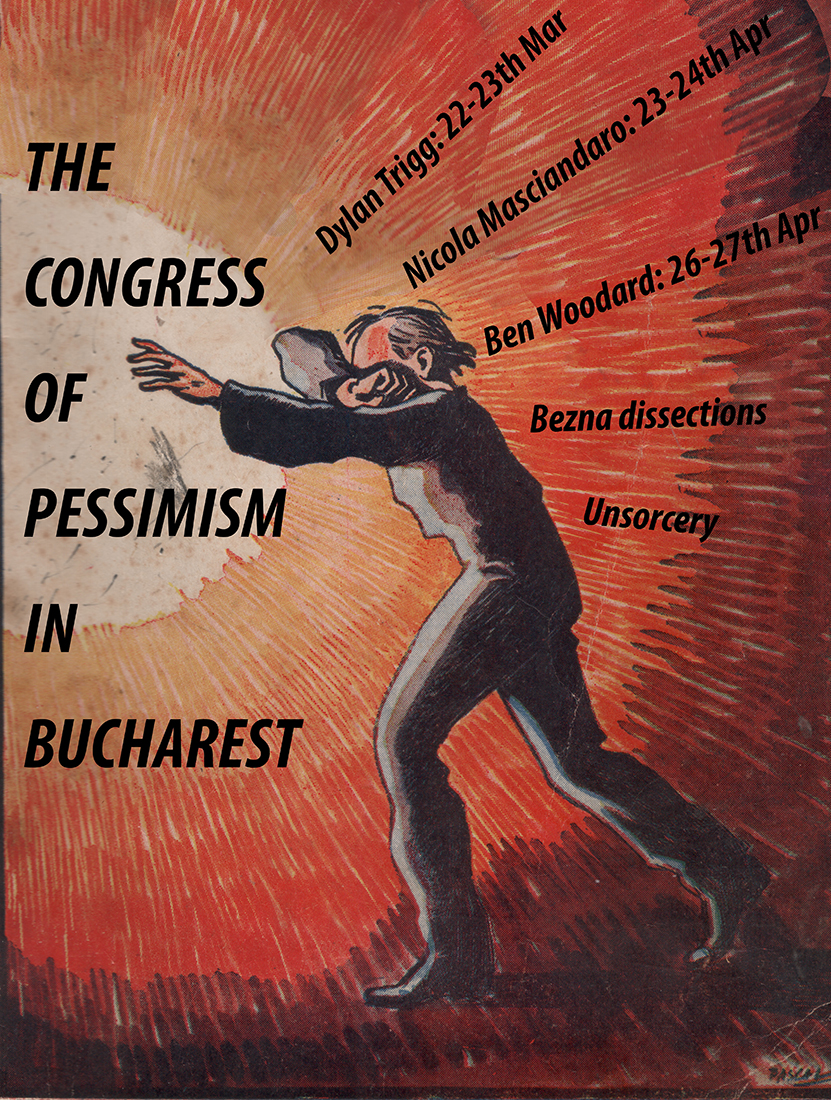 The Congress of Pessimism is a series of events organized in connection to BMR's Mediatic Affects course in the Art University of Bucharest. Events in the congress include:

22-23th of April Dylan Trigg (University College Dublin), An Unhuman Phenomenology [at] Salonul de Proiecte
These lectures take their inspiration from a question central to contemporary philosophy: to what extent is our sense of identity informed by the materiality of our bodies? If phenomenology has attended to this question, then it has done so largely from the perspective of lived experience within a personal history. But there is another side to this relation between materiality and subjectivity which resists experience. Darker and more obscure, and at all times portending to something unknowable, this other side of the body has for the most part been overlooked by phenomenology. It is a body that is alien, alienated, and alienating. These two lectures approach the alien materiality of the body from joint perspectives: cosmic horror and body horror, both poles are united by an overarching thesis: the horror of the cosmos is the horror of the body and the horror of the body is the horror of the cosmos. This intertwining of the alien and the human inhabiting the same body is termed unhumaniy.
More here

12th of April Unsorcery meeting [at] Salonul de Proiecte
Now, when we realize that our ways of seeing, being, feeling and behaving are equivalent with the extinction of life, there is a kind of nostalgia in the air. Maybe we can go back before the world was disenchanted, before we lost the contact with ourselves and with nature. Before the witches were burned for our malevolent thinking to be accelerated. Maybe we can have again a more complete and meaningful relation with the environment. Maybe we can reduce the distance from nature and be nature again. Maybe something can be done for the human to be re-animated, sensible, empathic and to feel again - and perhaps this life enhancement will bring back the hope and the future will exist again... Unsorcery starts where these hopes end and the remaining options are rather negative, dark and dead. Unsorcery entails negativity and darkness as paths of knowledge departing from the unknown and the unknowable thus aligning itself with the via negativa of the mystic tradition to embrace an impossible cognition and a horrific affect. A heretic rationality and an affective oscillation between the neutral and the worst. The Unsorcery technique proposes concepts and practices such as Second Body, Dead Thinking, Eternal Feeding Technique that we don't know where will lead but are oriented in a different direction than both the current capitalist religion and the nostalgic re-sorcery of world and nature.
More here

23-24th of April Nicola Masciandaro (Brooklyn College of CUNY), A Matter of Sorrow [at] Tranzit Bucuresti
Two lectures concerning a universal theory of sorrow. Radicalizing Heidegger’s insight that “the being of Da-sein is care [Sorge, sorrow],” I will affirm that sorrow belongs to the simple fact of being. Far from being limited to the evolutionary environment of our terrestrial sphere or the humoral confines of the human, sorrow is more properly a weird kind of cosmic substance composed of all being’s refusal of itself, the intrinsic negation of its own event. Grasping sorrow in these terms does not render actual, particular sorrow irrelevant or merely ontologically atmospheric, but rather redeems sorrow’s palpable darkness from both the hallucinogenic obscurity of affordable, instrumentalized problematicity (sorrow as something to be fixed or solved in the putative self-interest of making everything OK) and base ‘Manichean’ materiality (sorrow as merely an evil psychical ingredient in things). In this theory, sorrow is projectively restored to reality as not only a reflective index, but a perfectible operation of the universal, a way forward into new reality. Everyone knows that “he who increases knowledge, increases sorrow” (Ecclesiastes 1:18). Now is time to see the necessity of the obverse: he who does not increase sorrow, does not increase knowledge.
More here

26-27th of April Ben Woodard (Western University Canada) This Wandering Insignificance [at] Tranzit Bucuresti
The image of the wandering thinker (homo viator) has become a crudely romantic portrayal of the philosopher whether Aristotle's peripatetic (walking) method or Heidegger thinking on a forest path. In either case the figure of the philosopher is a trivial explorer of the many facets of life in order to speak broadly and widely in an attempt to conjure some ghost of meaning. In these two lectures I will attempt to articulate the wandering mode of philosophy in line with the Stoic (Seneca, Alexander), ancient Chinese (Zhuangzi), pragmatic (Peirce, Sellars), and idealist traditions (Schelling, Hegel) in which wandering is the inauspicious beginning of any rationalist or naturalist construction of thought. Furthermore such wandering, I will argue, points to the tenuousness of meaning as such indicating that the navigational and exploratory nature of thinking finds itself surrounded by the failure of cognition. Taking the pessimistic view however does not entail apathy or inactivity but suggests that the disentanglement of meaning from philosophy necessitates taking a long-view of possible human trajectories. These lectures will attempt to flesh out the difference between wanderings in which the trajectory is off-world (rationalism) and those which are inner-world (naturalism) by way of pessimistic myths constructed in the Platonic fashion as demonstrations of the worldliness of seemingly unwordly abstraction.
More here